I flew from Bogota to Cartagena and immediately found myself unprepared for the weather. It was so damn hot, and so hellishly humid. Instant sweat, just add Cartagena. Jeans were a bad choice. I rolled ‘em up and got to the hostel.

The Makko Hostel, the place I was staying, was in fact full of unpleasant surprises – and it had really high reviews on hostelworld.com. But sometimes, you just have to say fuck it, and that’s exactly what I said.

There were some peculiar characters in the hostel – to be sure, let’s call them the two dumb biatches from Cali, Colombia (TDBFCC). This acronym seems easy enough to remember. The TDBFCC were cute, but they might have been 15? I couldn’t really tell, and I wasn’t going to find out – they smelled like Los Angeles. Why were they peculiar? Well, for starters, they were sleeping on the couches in the common room of the hostel for a few days before I even got there. One of them seemed to have two levels of volume to her voice: talking and screaming. She was adorable, really. Anyway, these purposeless individuals found out how to liken themselves to the mosquitoes – seemingly always there, not impossible to deal with, but definitely annoying.

It wasn’t too long in that first afternoon that I met a girl from Germany (Tina). She was coming out of the dorm’s bathroom in a towel – I started talking to her. I figured that it would be worse if I just sat there in silence? Anyway, she and her two friends (Connie and Nastassja) invited me to dinner, one thing to note: there would be six girls.

This was a first for me while traveling in hostels. I think the ratio at this particular hostel leaned more heavily toward men than women. How could I say no? I was curious, hungry and hadn’t seen any of Cartagena yet. At worst, people would think I was gay; somewhere in the middle: a pimp; and at best: a bodyguard. Most people probably thought I was a body guard, with certainty.

We strolled around the old city and made it to one of the city’s walls. Beers were bought, sunsets were watched, pictures were taken (I was basically Ansel Adams).

Then, dinner: I had chuleta – which I believe is the side of a pig, or something like that. By the time the food arrived, I was ready to eat my own foot, but decided against it, since I wanted to walk back to the hostel.

Our little mob then proceeded to a quaint little plaza area close to the hostel. I had an aguardiente and a mojito. I only had to sit down to sweat; mind you, it was 9 p.m. – the sun had long ago descended. As the table exchanged stories, I felt a painful sting on my neck. I couldn’t cry like a baby, so instead, I slapped my neck and caught the bastard in my fingers. It was a flying ant, and he looked kinda like this:

I said “ow” a few times, inspected the insect, put him on an ashtray and then burned him to death. I called it retribution.

And this was the first night. You don’t have to read on if you want, but the details of the second day will inform you on where to get absolutely fantastic empanadas in Cartagena, so if you are ever there, maybe you should give a shit.

I had woken up a few times during the night due to the sweet mouths of my bloodsucking friends, the mosquitoes. In addition it was a bit warm for my liking, and while we had an air conditioned room, the wall-AC was deemed insufficient for the 10 or 12 sleeping humans. Advice: if in Cartagena, make sure you get a room with an AC — unless you like bikram yoga, dehydration or just, well, sweating.

I got my bearings and met with three of the girls (Merel, Catharine and Kristy) from the night before to cruise around town and visit the fort/castle: Castillo de San Felipe de Barajas. It looks like this: 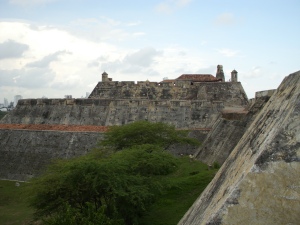 Yeah, that’s it. It comes with an enormous flag, as you can see:

We ate ice cream. It melted in our hands. I thought about the small child, crying because his ice cream was melting all over his hand and he couldn’t eat it fast enough. I didn’t want to be that child.

More walking, more sweating, and then, by the good grace of some higher power, Kristy found the empanada place she had heard about. It’s called Ciudad Movil, and the building also supposedly holds yoga lessons, acts as an art gallery, and serves amazing pizzas – the full kitchen wasn’t open when we visited, so we had to “make do” with the empanadas. Find this place:

We kept cruising around, and there was a general consensus among the group that Playa Blanca would be visited in the near future, namely, the next day. I added myself to the group, in the most polite way as possible, and we headed to the grocery store to buy supplies. I’ll make the list short for the sake of time: 4 liters of water, 1.5 liters of Coke and 2 liters of Rum. There was food, but that’s not important.

Merel and Catharine cooked a damn good salad – Kristy and I ate it. 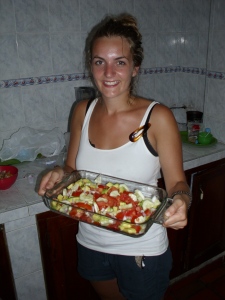 After dinner, Rogier, a good guy from the Netherlands became a +1 for a our trip to Playa Blanca the next day.

We would be waking up around 7 a.m. to get to the port by 7:30 a.m., an early-morning wakeup that would pay great dividends.